We all love it when we find out that a celebrity has adopted one of your favourite products. Here at Lay-Z-Spa, we’re no different and that’s why we wanted to showcase some of the stars who use our hot tubs. From British rapper, singer, songwriter, actor and television personality Professor Green, comedy favourite Greg Davies or international diving sensation Tom Daley; our spas have been enjoyed by a host of celebrities.

Stand-up comedian and actor Greg Davies has been a common presence on TV in recent years as Mr Gilbert in The Inbetweeners, Ken Thompson in Cuckoo as well as a host of guest appearances on Mock the Week, Would I lie to You? and Live at the Apollo. During his special one-off programme for Comic Relief, Greg was also joined by diving prodigy Tom Daley. Despite finding himself on top of the O2 Arena, the double-world diving champion and Olympian was able to experience the warmth of the award-winning Lay-Z-Spa Paris AirJet whilst enjoying the panoramic views of London!

Kaiser Chiefs frontman and former The Voice host, Ricky Wilson also joined Greg Davies as he was interviewed from the top of the O2 Arena!

Lay-Z-Spa Fact: The production team of the show would have had to transport 806 litres or 213 gallons of water to the top of the 95-metre high arena in order to fill the Lay-Z-Spa Paris AirJet!

TV favourite, radio DJ and former model Vernon Kay dropped by to say hello at one of our trade shows. Presenting shows such as All Star Family Fortunes, Beat the Star and Splash!, and presenting Radio 1 and more recently Radio X, Vernon has had a well-established TV and radio career.

Stephen Manderson (AKA Professor Green) has turned his hand to documentaries in recent years, exploring important issues affecting modern Britain. These hard-hitting documentaries have been proven very popular and can be found on the BBC iPlayer.

Best known for starring in The IT Crowd winning BAFTA for Best Male Comedy Performance in 2014, Richard Ayoade has recently hosted the ingenious games and fiendish challenges of one of the UK's favourite TV shows, The Crystal Maze. Steven Mangan has starred in I'm Alan Partridge and various films including Postman Pat: The Movie.

Comedians and Actresses Sally Phillips and Fiona Allen stopped by to pay Greg Davies a visit during his special Comic Relief show.

In addition to co-creating British sketch comedy Smack the Pony, Sally Phillips and Fiona Allen continue to have eclectic careers, with Sally starring in Bridget Jones's Diary, whilst Fiona has appeared in Coronation Street and Waterloo Road.

A record producer and DJ, Wilkinson is one of the brightest UK talents in the music industry. Although he is normally producing some of the biggest summer hits like Afterglow, he still needs to kick back and relax every now and then in his Lay-Z-Spa Palm Springs AirJet!

Theresa May And Jeremy Corbyn

Starring in The Last Leg’s: Reunited Kingdom, a rather convincing imitation of Theresa May and Jeremy Corbyn appear to settle their differences in the comfort of a Lay-Z-Spa!

Whether you're a celebrity or not, we always like to see photos of Lay-Z-Spa users and setups. Tag us on Facebook or Instagram and use the hashtag #layzspa 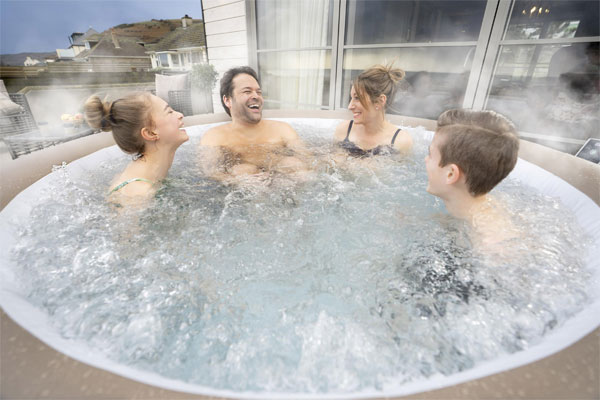