First introduced with the Barbados AirJet™ in 2020, EnergySense™ is a revolutionary development in the construction of inflatable hot tubs making Lay-Z-Spa even more energy-efficient and highly suited to use all year round. Now, this insulating and energy-saving technology is available in two Lay-Z-Spa hot tubs with the release of the new Zurich AirJet™.

EnergySense™ is an insulating cover that is integrated in the construction of the inflatable hot tub. Lay-Z-Spa hot tubs with EnergySense™ have this insulating material in the top cover and an external cover that fits around the outside of the main inflatable liner for maximum heat retention.

The EnergySense™ energy-saving insulation has a layer of processed foam enclosed in an aluminium coating and it is wrapped in 2 layers of Lay-Z-Spa's tough and robust DuraPlus™ material which offers insulation unlike any other inflatable hot tub.

How Does EnergySense™ make Lay-Z-Spa Energy-Efficient?

Lay-Z-Spa hot tubs are already energy-efficient with insulating lids and top covers as standard and a construction with a material choice that makes them heat quicker and hold the heat for longer. And, not forgetting, pump features such as an intelligent heating system and energy-saving timer.

The EnergySense™ insulated liner’s double layer protection makes it 40% more energy efficient when compared to similar hot tubs and saves on energy consumption. It makes your Lay-Z-Spa heat up to 20% faster than traditional PVC spas and retains the heat for a considerably longer period of time.

Lay-Z-Spa hot tubs with EnergySense™ are therefore some of the most energy‑efficient inflatable hot tubs available.

What are the benefits of EnergySense™ insulated covers?

Aside from the heat retention benefactors, Lay-Z-Spa hot tubs with EnergySense™ don’t require you to spend extra money on an additional insulation cover. Because the insulating layer is built-in, it matches the design of your Lay-Z-Spa and you don’t need to remove it to use your hot tub - except for the top cover, which you would remove anyway.

We have received a lot of positive reviews and comments, from owners of the Barbados AirJet™, about its heat retention and how temperatures only drop a few degrees, even in the colder months of the year. 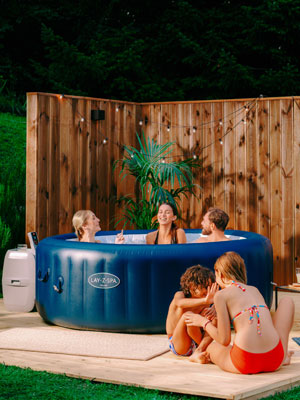